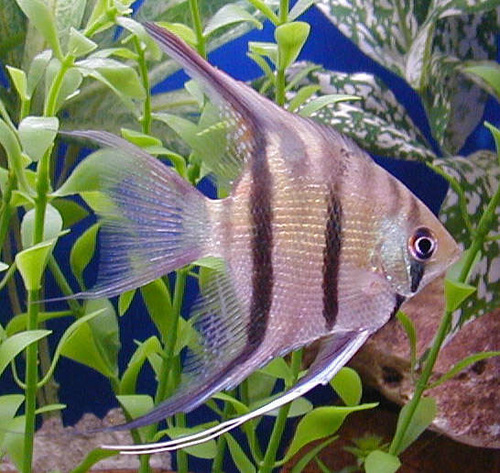 Size: Up to 6 inches

These angelfish are unusually shaped for being part of the cichlid family.  However, their shape helps them to hide among roots and plants and with their stripes this provides excellent camouflage.

Each angelfish can lay 100-1200 eggs at a time.  During the stage of the eggs, both parents take care of those eggs by making sure that they have sufficient water circulation next to them by swimming really close.

In the aquarium, they like their tank to be about 80 degrees F which is warmer than all our other tanks! 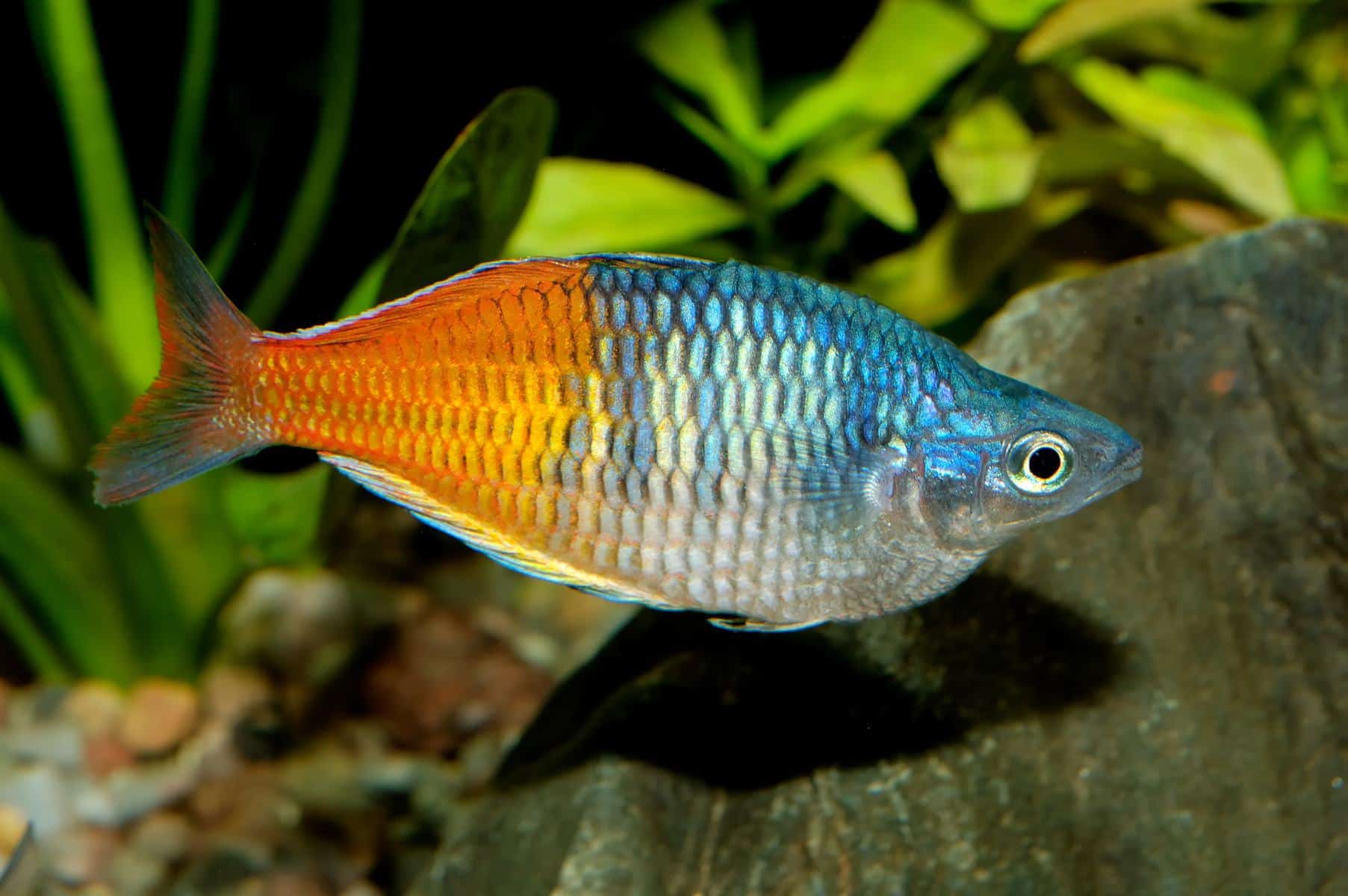 The name Boesemani is in honor of the Dutch ichthyologist Marinus Boeseman who collected this type of fish.

The color intensity of the Boesemani Rainbow fish is a good indication of their mood and their health.  They show their color intensity more during the night time rather than in the day.  They also prefer their tank to be around 80 degrees F! 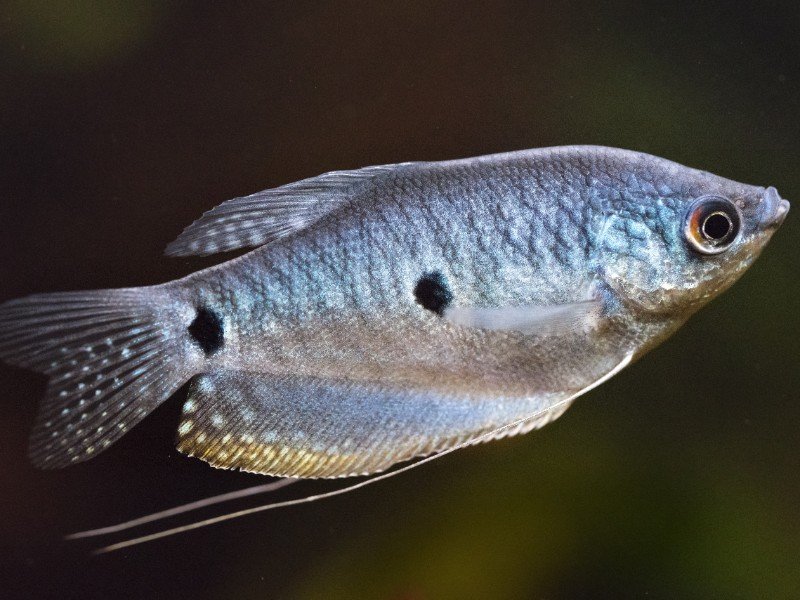 Size: Up to 5 inches

Male gouramis are known to be aggressive especially towards other fish with long flowing fins and bright colors because this is providing competition for impressing the females.  One gourami may become dominant and will tease the others by chasing the others but they do live well with each other if they are raised with each other.

The male will create a bubble nest and entice the female to lay her eggs there.  She may lay up to 800 eggs at a time.  Afterwards, the male protects the eggs and may even become aggressive towards the female that laid them. Tiger Barbs are active shoaling fish and are fairly aggressive with each other.  They will create a pecking order that they sometimes extend to other fish.  If there are enough of them though in a shoal, they will end up chasing each other and leave the other fish alone and even though this sounds stressful, they thrive in this way.

If the Tiger Barbs lived with Clown Loaches, they would end up schooling and acting like each other which is a unique relationship.

The Tiger Barb was also used to make the genetically modified GloFish which are fluorescent colored. 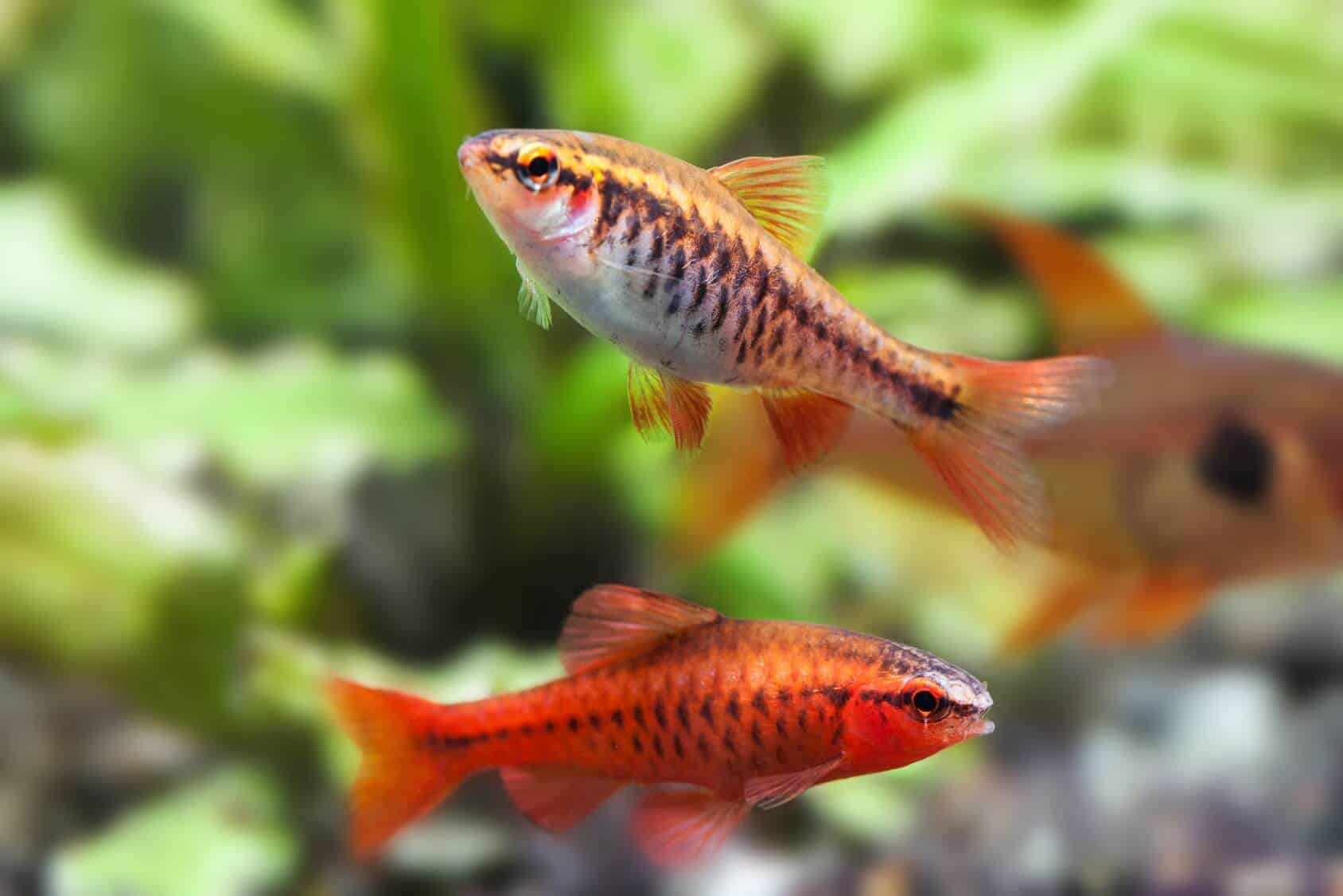 Cherry Barbs are a schooling fish and are less discrete in their schooling than other barbs.  Females are a fawn color with slightly greenish and silver highlights.  The male is more red and a more slender body type.

The Chinese Algae Eater is more commonly found in Thailand, Laos, and Vietnam rather than in China.  The warm fast flowing rivers and lakes is where they really enjoy themselves.

The Chinese Algae Eater has a mouth that has a “sucker” modification that allows the fish to attach itself to smooth surfaces.  They are able to use these sucker mouths and hold onto something for hours so as to not get pulled downstream.  They do not have barbels or spines which are common in other similar algae eaters. Chinese Algae Eaters are praised for their ability to clean tanks in short periods of time and with a decade lifespan, they are well worth the investment.

During mating season, you can tell the difference between the males and females for the males will develop a horn on their heads that the females will not. Life Span: Up to 5 years

Another name for the Roseline Shark is Chorai Kanni which in India means “bleeding eyes.”  They are part of the Cyprinidae family and are not actually sharks.  With their streamlined torpedo shape and triangular dorsal fins, they look like little sharks.

They enjoy social interaction and will school up with each other.  Roseline Sharks will start swimming in unison which creates the flashing colors. The Royal Pleco is part of the armored catfish family because of the scutes, or strong plates of skin, that cover its body. It is one of the few fishes that are capable of eating and digesting wood by using symbiotic gut bacteria.  They are heavy and inflexible so they do not swim well.  Their strong sucker-like mouths allow them to hold onto rocks and wood in fast flowing waters. The Bristlenose Pleco is also known as the Bushymouth catfish.  It is a species of armored catfish which means that it has the armor-like scutes, or scales, that cover the upper part of the head and body.  It is one of the smallest catfish.  They are good algae eaters and are used in aquariums to help sift through the sand and keep the algae growth down. 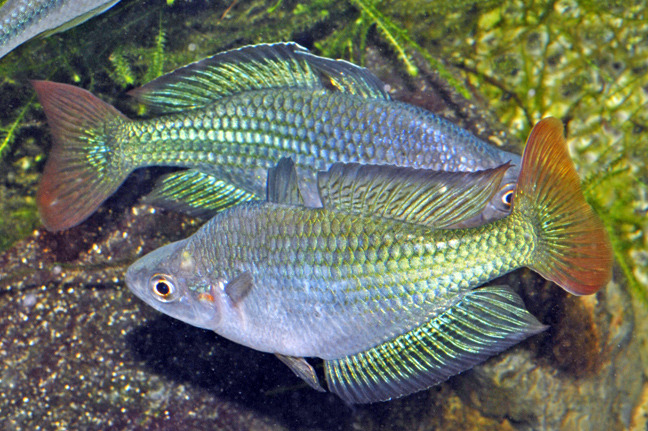 Size: Up to 2 inches

Life Span: Up to 5 years

There are nearly 50 varieties of the Australian Rainbow fish, all closely related and very colorful.  They are commercially produced in farms of southeast Asia and Florida to allow them to be more available in the US.

Mature fish show their best colors in the morning and when breeding bringing out all their different shades of purple, blue, green and yellow.